Growth brings problems, including increased traffic. The Research Triangle Park area of North Carolina has been one of the fastest growing regions in the country, and has experienced a predictable increase in traffic congestion. According to a Raleigh News & Observer article earlier this week, increased congestion is causing some serious safety concerns as drivers avoid arterial streets on their daily commutes to get around rush hour traffic. The article cites the city's efforts to respond to the growing problem, and lists priority roads for infrastructure improvements that can increase safety for all of us: Hardimont Road, followed by Crest Road, Varsity Drive, Quail Ridge Road and Harps Mill Road. 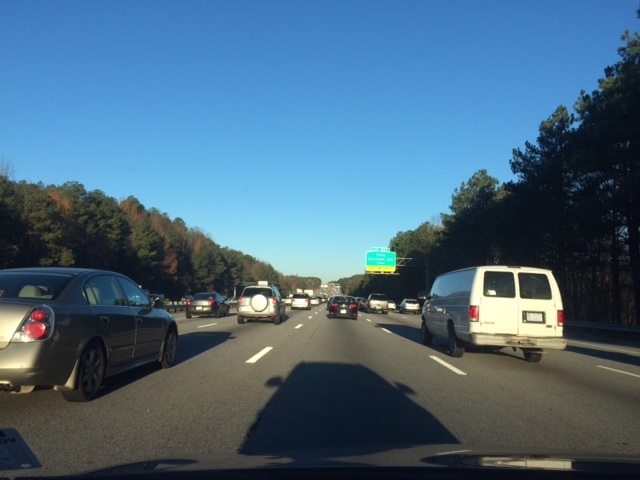 Traffic in the Triangle on a recent early Friday morning

Motor vehicle collisions are not unavoidable "accidents." They are usually the result of at least one driver's refusal to follow the rules that we, as a society, have determined will keep us safe. This includes obeying traffic signals, reduced speeds in residential neighborhoods and school zones, avoiding impaired driving, and yielding the right of way to other drivers- especially emergency vehicles. If everyone consistently followed the traffic rules we would have very few injuries from car crashes.

Unfortunately, not everyone follows the rules. People drive distracted (don't get me started on texting while driving), they speed, they don't signal, they seize the right of way belonging to other drivers. The failure or refusal to follow the safety rules inevitably leads to injury, and those injuries will inevitably increase as growth in cities like Raleigh continues to outpace expensive infrastructure improvements. The personal injury lawyers at Edelstein & Payne have decades of experience holding unsafe drivers (and the insurance companies that agree to take responsibility and then refuse to pay for the damage they cost, but that's another story) accountable for the injuries they cause. If you were injured in an incident involving a car, or any other incident that was the result of someone else failing to take ordinary care, give us a call or fill out the online contact form in our sidebar to schedule a consultation with one of our lawyers. Personal injury consultations are always free of charge.