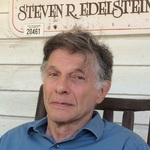 Steven Edelstein has been a tireless advocate for freedom and justice throughout his storied career.  He was note editor of the law review at Washington University School of Law, where he graduated in 1966. He went on to become a staff attorney and then director of the Housing Unit at St. Louis Legal Aid. During three years of private practice in Vermont, he served part-time as general counsel for the ACLU and part-time as a public defender.

In 1978, Steve moved to North Carolina, where he worked as Staff Attorney then Director of Farmworker Legal Services of NC. After the federal government imposed restrictions of Legal Services representation, Steve and Travis Payne formed Edelstein & Payne in 1982.

Steven has been active in community groups in North Carolina, including work as a cooperating attorney with the ACLU, working with the North Carolina Occupational Safety and Health Project, the Center for Woman Economic Alternatives, and recently with Occupy Raleigh.

As of Fall 2019, Mr. Edelstein has changed his status with the North Carolina State Bar to inactive. He is effectively retired and no longer practices law, but remains an office presence and available for his wise counsel.